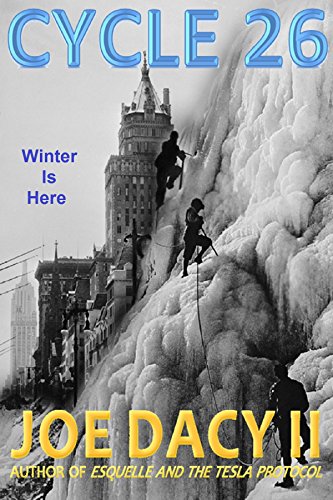 In the near future, the Ice Line has settled the global warming debate with a vengeance. In eleven “years without summer,” it has buried the country in snow from Chicago to Dallas, creating an apocalypse Man has never experienced.

NOAA Meteorologist John Snowden is determined to solve the scientific mystery behind this juggernaut’s sudden appearance. While foragers try to salvage what they can from this “mini Ice Age,” search-and-rescue missions pluck a very few from certain death.

Amy Callahan, a Chicago nurse, experiences the other half of the catastrophe, fleeing from one refugee camp to another as the Ice Line descends. She’s one of the lucky ones; some survivors have been left behind to fend for themselves. They are now known as Ravagers.

Together, the pair must brave the perils of a globe gone cold to reveal a world-saving secret. But will the hungry Ravagers get them first?

Cycle 26: Winter is Here by Joe Dacy is available at Amazon.com.