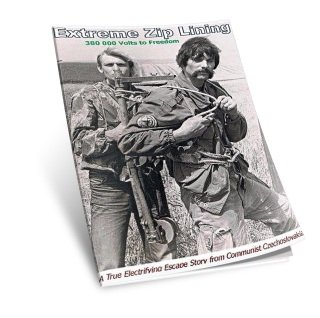 In July 1986 a twenty-year-old Zdenek (Daniel) Pohl and his friend, thirty-five-year-old Marcus, came up with, and executed what many believe to be the most creative and daring escape in the world. They did the unthinkable. You surely can call this one: “Extreme Zip Lining!”
During high wind, and severe rainstorm, they zip lined on 380 000V power line out of a nuclear power plant from Czech Republic, formally known as (Communist) Czechoslovakia, over the Iron Curtain, into Austria.

While back home in Czech, perplexed authorities demonized them, in Western block countries their story exploded upon a public like an atomic bomb and became instant media sensation. At least in Europe, tension in Middle East, the biggest drug bust, terrorists or gun runners didn’t get better coverage than this story. They were called: “The Young James Bonds of Eastern Europe.” In oppressed countries; as well as in the free world, they gained legions of fans, constantly wanting to hear more riveting details of this amazing accomplishment.

As a result, their exotic “unauthorized exit” kept stealing the headlines of major magazines and newspapers even many months after. Some of the U.S. media such as L.A. Times, Boston Globe and Chicago Tribune noticed this truly unique triumph of a human spirit as well.

Today, Daniel’s self-made zip lining pulley can be seen in Checkpoint Charlie Museum in Berlin/Germany and the detailed account of this one of a kind story is finally available to the readers here on Amazon.

Extreme Zip Lining by Daniel Pohl is available at Amazon.com.