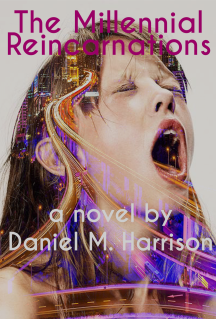 International Number 1 bestselling author Daniel M. Harrison portrays the modern millennial psyche like no other author has ever before. In The Millennial Reincarnations, the young minds of today are not just infused by the fast-paced, always-on economy of things, but they themselves are parts of the fabric of our changing environment. Specifically, Harrison imagines today’s young millennials as the reincarnated technology that drives our spiritual goals, needs, wants, aspirations and desires. The author expounds upon this theme in 70,000 words of fiction to explore the effect of technology upon the spiritual core of us all.

The Millennial Reincarnations (Amazon) is Daniel M. Harrison’s latest masterpiece, construed as a novel in 3 parts: Body, Face and Soul. The narrative arc spans the years 1990-2014, taking in almost the entire Millennial era, during which the previously gradual adoption of artificially-orchestrated and influenced values  and the associated technologically-infused processes of thinking has been rising at its steepest incline ever. Harrison considers in compelling and jaw-dropping prose some of the furthest-reaching effects on society as a whole of this trend.

The Millennial Reincarnations is the composition of what amount to an inter-related series of stories that take place from within this 14 year period in New York City and in Shanghai, China. When two young girls are killed in a violent car accident, they have no idea that, unbeknownst to them, the reaction of a child star in the car in front who dies on the operating table in the hospital will set in motion events that bring about the next twenty years of economic upheaval and prosperity and define their individual and collective destinies.

For the rapid reincarnation of their young souls is the direct result of the high-tech advancements society is making at the time they die, which, in speeding up cognitive function, in theory will allow less rested minds to adapt to their new bodies much more quickly. However, when formed inside bodies the young girls’ souls appear at times partial and fragmented, as if hardly able to remain complete in the one body they inhabit. Although materially rich and socially popular, their minds suffer from chemical addictions and emotional dependencies as a result of their spiritual afflictions, which had no time to rest before returning to relive under the weight of the earth.

Ultimately, the author uses this premise to set in motion a series of catalytic events that chime with the real world in which we live as well as to explore in greater depth the psychological ramifications of a whole generation raised on excess material wealth, social agendas, individualistic points of view commingled with greater societal ideals and views on money as an object to be mastered and used – not needed – which permeates so many juvenile Millennial societies today.

In The Millennial Reincarnations, Harrison returns to the big picture issues of wealth and poverty, life and death, money and war, with more powerful prose and stylistic twists than ever before. The author packs every one of the 12 chapters in the book with a moving and thrilling series of events and a twist right at the very end that you won’t see coming.

This is an incredible, eye-opening, and moving read – cinematic in the execution Harrison delivers in capturing the whole world within 300 pages. Already being muttered about in the elite literary circles of London and New York as a potential candidate for the Great Millennial Novel, The Millennial Reincarnations will stay with you long after you have turned the last page. A tremendous work of fiction by a masterful author who has been described as “brilliant” by Jeffrey Robinson and “easily the best” by the Huffington Post’s Azeem Khan.

More information about The Millennial Reincarnations is available at www.dmh.co.

The Millennial Reincarnations by Daniel M. Harrison is available at Amazon.com.