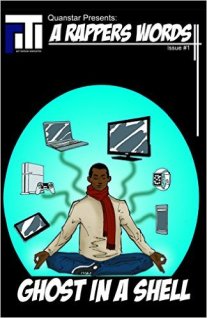 The series, “A Rapper’s Words” is the brainchild of American underground Hip Hop artist Quanstar. Each issue will be a self contained story illustrated around the lyrics of some of Quanstar’s most socially provocative songs.

The first issue of is “A Ghost In A Shell”. The story takes an in depth look on man’s dependence on technology and how it has nurtured the worst in us, e.g. narcissism, violence desensitization, and fame mongering. Quanstar’s powerful lyrics coupled with Rafa Lee’s (Center Lane and Fluttering Dreams) dramatic black and white illustration create a synergistic flow that promises to be a strong launch for this bi-annual series.

A Rapper’s Words comes with a free download of Quanstar’s latest album, Play Games, and get your first ride with Uber (up to $20) free.

A Rapper’s Words: A Ghost In A Shell by Quanstar, Illustrated by Rafa Lee is available at Amazon.com.