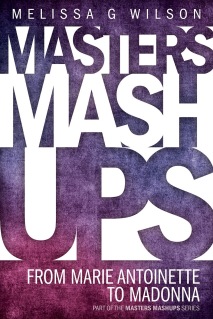 What do Marie Antoinette, former Queen of France, and Madonna, the Queen of Pop have in common? These two women are no strangers to the lives of opulence, royalties, and public scrutiny, but how do their lives truly compare to one another? Both governed by head-strong mothers and deep religious upbringings, this mashup will examine the turning points in their lives, the people that influenced them, and the major events that occurred later in their biographies to paint the fullest picture of who these Queens actually were.

Dive into this mashup and learn more and have more fun learning at the same time. The mashup has existed for ages, though the term only became fashionable in the past decade. Its recent, renewed popularity in the entertainment and technology industries proves blending the tried-and-true with innovation is a successful means to communicate with the masses. Literature is no exception.

Author Melissa G. Wilson explores how each woman was inspired and molded by the cultural and artistic norms of their times and how each struggled to break the barriers imposed on them by the men in their lives.

The second book in this cool new series by Melissa G. Wilson. She has written fifteen books, including Networlding, which held a #10 Amazon spot for an entire year.