Reading and Writing Addiction was able to catch up with James Strait, Author of World War III for an interview. We are excited to share this interesting interview today with our readers.

RAWA: When did you first discover that you were a writer?
JS: I’m not sure I’m a writer yet. I do create stories and take them to completion and publication…but I don’t know that I’m a writer in the sense of established authors who have spent their lifetime telling stories. I’ll accept that I’m a writer in training.
RAWA: What is your favorite part of writing?
JS: Being in the zone. There have been days where I write fourteen thousand words and am content with the quality and creativity of that production. There have been series of days where I’ve had back-to-back similar high word counts…and I find the writing to be better than when I go slower. I don’t look back while writing. I trust my voice and know my topics and never open the door for re-writes on the fly. Looking back…literally going back and rewriting what has already been said on the same day it was originally said is literary spinning of the wheels. Rewrites need to happen days or weeks later…at least for me.
RAWA: What do you think is the most challenging aspect of writing?
JS: Getting settled into the story is probably my biggest hindrance. I’ve had many false starts, but usually marry them together as part of a story that I finally embrace and take to completion. I’m in that mode right now…but I can feel a calmness coming. For me, calm equals full-speed-ahead.
RAWA: Tell us about your latest release.
JS: My latest book is an action adventure novel about World War Three in the near future. It’s not a war based upon the twentieth century model of global conflict…it’s more a hybrid of old school and terrorism on the streets of America. It began as a veiled effort to suggest a technique to be pursued in the real world by Special Forces operators, and then morphed into a larger scale story where ripple effects share front stage with active characters.
RAWA: How did you come up with the title of your book?
JS: World events have people thinking in terms of large-scale conflicts between polarized dogmas and worldviews. History has taught us to think in conventional terms when considering multiple civilizations and cultures locking horns to force their view and way of life upon the other. The title reflects the structure of the story…half old school, half the madness of modern terrorism.
RAWA: Who are some of your favorite authors?
JS: John D. MacDonald, Tom Clancy, Dean Koontz, and the entire staff of Mad Magazine.
RAWA: What do you think has influenced your writing style the most?
JS: My structured background…military and professional aviation.
RAWA: As a writer what is the accomplishment that you are most proud of?
JS: Just having people get back to me with reviews and comments about how my work affected their life. As long as I know the feedback isn’t self-indulgent, I’m okay with any commentary. Love me, hate me, just don’t be unmoved. Failure to get readers to think in new ways is failure to me.
RAWA: How did you get published?
JS: I was first published traditionally when hired to write one of the very successful series of “Weird” books. “Weird Missouri” was my first book and it demonstrated to me that I could be prolific if desired. I was given a year to make it all happen, which required that I spend eight weeks in Missouri, driving 8,500 miles while visiting over 300 venues, interviewing hundreds of Missourians…all while taking 2,700 photographs. I then sat down and wrote the book in four months. After that experience I knew that if gifted with a normal life span, that even starting late in life I’d still be able to write many books.
RAWA: Do you have any advice for writers looking to get published?
JS: Never doubt your voice. Never look back. Never listen to a negative person. You’re the boss when creating a book…so embrace your power. But as it relates to choosing a publisher…know what you want before making contact. Don’t get sucked into ancillary stuff like multiple thousand dollar marketing schemes. As an independent, you’re on your own to make it all happen. Be as creative in the process of selling your book as you were in writing it. And it helps hugely if you’ve written a good story! Good sells! 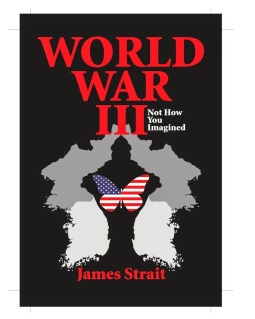 World War III: Not Like You Imagined by James Strait is available at Amazon.com.