Skip to content
Reading and Writing Addiction was able to catch up with Lorrie Farrelly, Author of Timelapse for an interview.  We are excited to share this interesting interview today with our readers.
RAWA: Tell us about your latest novel.
LF: Timelapse is a wide-appeal novel best described as a time-travel/sci-fi romantic

Lost in a brutally repressive world, searching desperately for any evidence his son still exists, Alex’s only ally is Jessie O’Neil, a reckless, courageous outlaw with a price on her head. As they come to depend on each other to survive, their respect and feelings for one another grow. But the roots of this nightmare world lie in a terrible crime – a crime committed over 100 years earlier.

To have a future, Alex and Jessie must somehow find their way to the past.
Timelapse is now available from Amazon (and other booksellers) in ebook, paperback and audiobook form (read by the gifted Keith Tracton.) It’s a Readers’ Favorite 5-Star novel. Readers’ Favorite reviewer Michael McManus called it one of his favorite books of the past year.

RAWA: Where did the idea come from to write this novel?
LF: I’ve always been a huge fan of The Twilight Zone. Those stories may have been fantastic or spooky, set in the past or the future, or on Earth or not, but they always had real human experience at heart. They had important things to say about how we live, how we treat one another, what we value, and what we’re willing to risk in an uncertain, often dangerous world. There were some brilliant contributors to The Twilight Zone: Rod Serling, Richard Matheson, Ray Bradbury, Charles Beaumont, and Earl Hamner, Jr., among others. Some episodes were based on classics of literature, such as Ambrose Bierce’s gripping and tragic “An Occurrence at Owl Creek Bridge.” These were the stories and the writers that most sparked my imagination.
Today our society is divided, with much debate on the issues of security versus liberty, religious law versus civil law. I thought how easily the balance of a society can tip from moderation to extremism. While these issues are at the core of Timelapse, I believe my most important job is to entertain readers, to write a story they’ll find exciting, intriguing, and suspenseful, full of passionate emotion, with believably human characters. I love to write stories that keep readers on the edge of their seats until the last page is turned – because that’s exactly the kind of story I love to read.
RAWA: Give us an insight into your main character. Why is he/she such an important part of the story?
LF: Alex Morgan is little different than most of us. The emotional challenges of dealing with the loss of his wife, and of being a single, working parent, occupy his daily life and his energy. He rarely gives a thought to the freedoms he takes largely for granted. But in order to survive in a desperately dangerous world, he needs to dig deep for every last bit of his resolve and his strength – physical, mental, and emotional.
RAWA: Where does the story take place and why did you choose this setting for the novel?
LF: I chose Washington, D.C. – past and present – as the setting for Timelapse because it’s the nerve center of our nation.
RAWA: What was the hardest thing about writing this novel?
LF: Making Alex’s transition from academic to fighter believable – at least in a National Treasure sort of way.
RAWA: Is this book part of a series? If so, tell us a little about the series.  If not, would you consider creating a series from this novel and what are your thoughts on writing a series?
LF: I do want to write more time-travel stories, as I love them, but Timelape’s story is complete.
RAWA: If this book were made into a movie which actor/actress would you like to see playing the lead character (s).

LF: In my mind, I see Alex as a Tom Hiddleston-Tom Mison-Matt Smith type (minus Brit accents); and Jessie, a bit like Ashley Greene as “Alice Cullen” in the Twilight movies. 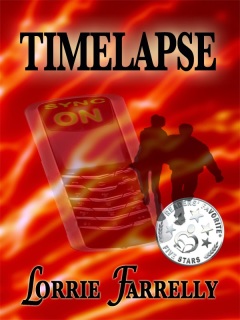 Timelapse by Lorrie Farrelly is available at Amazon.com.

One thought on “Interview with Lorrie Farrelly, Author of Timelapse”